Wohali would like to access 300 acre-feet of Coalville City Water for their golf courses and development.  City Attorney Sheldon Smith called their proposal a “Win-Win” as he presented it to the Coalville City Council.  But is it?

At a glance, the agenda for Monday’s Coalville City Council Meeting seemed pretty full, yet unexceptional.  It included a presentation of the 2019-2020 audit, updating the fee schedule, reviewing the civil rights policies and awarding the bid for the construction of the water treatment plant.   However, listed on every agenda near the bottom are the “updates” from members of the staff and/or our elected officials.  Recently, this has been the portion of the council meetings where the council and the virtually attending public find out what’s really happening in Coalville.

During the “Legal Updates” portion of the meeting, Coalville City Attorney Sheldon Smith delivered a 30 minute presentation on the benefits of having the city enter into a water agreement with Wohali. Basically, Wohali would pay Coalville City’s annual fees on the 300 acre/feet of Weber Basin Water in return for being able to use that water for their golf courses and development.  However, when dealing with water, nothing can be that simple.  In a computer presentation, Sheldon broke Wohali’s proposal down into three slides.  We took a screenshot of the slides presented during the meeting and they are pictured here for your reference. 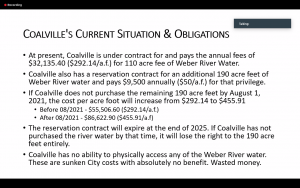 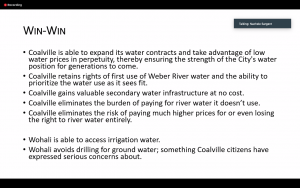 The council’s reception seemed luke-warm to this proposal.  They had many questions about how it would work and what each side’s benefits and obligations would be.  It was explained that there would be a contract governing this agreement between Coalville City, Weber Basin and Wohali.  Sheldon stated that he had a draft of this contract from Weber Basin sitting in his email’s inbox, but he refused to open it without council permission.  He stated, “I don’t want to work in any direction, even though to me it seems like it’s got a lot of positives, unless the council wants me to…I’m not going to be accused of going and making a contract without having the authority from the council.”

What’s In It For Coalville?

During the presentation, City Attorney Sheldon Smith stated, “If Coalville City doesn’t want to work with them, then they can just go drill wells and water their golf courses that way.”  By accepting the developer’s proposal, Coalville City avoids the possibility of having Wohali drill for ground water. According to the “Win-Win” slide from above, Coalville would also:

What’s In It For Wohali?

As the council was voicing some of their concerns with the proposal, Paul, Coalville City’s New Engineer and JUB representative stated,

“If they (Wohali) were to negotiate water on their own, it would be at a much higher rate.  That’s their incentive to work with the city.  They’re willing to invest money so they can get a lower rate on what they’re having to pay.  You don’t have to feel like –  What are we missing here, why are they being cooperative?”

The following figures were taken from the presentation screenshots referenced above:

In addition, Coalville City’s water has a higher priority than water Wohali could access on their own, meaning they will be able to utilize this water longer each season than they would any water they purchased without the help of the city.

Could There Be More To It?

The heading of a KPCW article from late October stated “The controversial Wohali Development in Coalville is building a water reservoir for the new community, even though they don’t have any water rights to fill it.” The full article can be found here.  From conversations with Weber Basin as well as the information referenced in the city’s slides above, we know Wohali is currently working to purchase 210 acre/feet of water from Weber Basin, but they would like to do so under the umbrella of Coalville City. It was stated at Monday’s city meeting that according to Wohali’s current figures, the development will need 510 acre/feet.  Outside of contracting with the city, what, if any, other options are available to Wohali to gain the additional 300 acre/feet of water needed for their resort?

Other Things To Ponder:

Coalville City has been paying the reserve fee on their 300 acre feet for years.  During the meeting, city council member Don Winters pointed out that the city could ask Wohali to reimburse them for the years it has payed to hold on to those shares. This was a great point and it got us thinking:

With an issue this important and complicated, there are many things to consider.  We encourage you to contact your city council members and let them know your opinion on this proposal and any concerns or suggestions you may have as they look into approving this contract.